Maram is from Homs, a city in Syria ravaged by conflict.

When Maram’s husband disappeared, she knew her family’s only hope for survival lay in escaping. With her four children in tow, and heavily pregnant, she set out on foot through the mountains. “I didn’t know how to get to Lebanon—I only followed the lights,” she says.

Shortly after arriving in Lebanon, Maram gave birth to her fifth child. Although overjoyed, the birth made an already difficult situation seem insurmountable. With no money to buy medicine for her baby or to feed her five children, her debts began to mount. 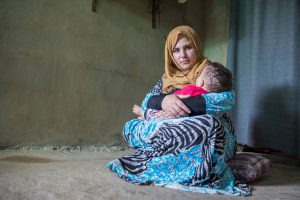 “It was a terrible situation. I didn’t have any information about where my husband was and now I had a 2-month-old baby. A woman in our compound said to me, “I could pay all of your debts, but in return I want your child because I couldn’t have any children. I will raise her since you can’t, but she will be mine.”

Thankfully, Maram never had to make that decision. A neighbour put her in contact with Mercy Corps who helped her find a temporary job at a recycling factory. She was able to start the next day.

Maram says, “I only want my family to be able to meet their basic needs—food, water and shelter. It’s been three years now that my children haven’t had any schooling. This year I would like to register them in school. This is my only wish, to see them grow.”