“I don’t know how anyone could do this experience and not come out morally obligated to do something about it.” Paul Ellingstad told us, after the refugee simulation in Davos, 2011. He was, at that time, Director of the Office of Global Social Innovation, Hewlett Packard.

Paul Ellingstad spoke with blazing honesty. He spent time in serious discussion, following the simulation, looking at various options that greater engagement might be possible..

Not that he wasn’t already active. In his HP role, he had already developed their participation in a broader partnership and collaboration with the UNHCR, through which HP helped sponsor the refugee event in Davos.

Paul writes that, prior to the time, he had experienced, first hand, the power of connecting executive leaders to people and causes, “in a much more human way than through a PowerPoint presentation.” Describing the refugee simulation, he said, “this was an even more powerful and compelling immersion and connection to the plight of refugees and other displaced people. It reaffirmed and energized a clear call to action to engage.”

Seven years on, Paul’s involvement has only deepened and grown in support of organizations serving displaced people and others in humanitarian need.  As a consultant and advisor on innovation, change and leadership, he is passionately dedicated to building bridges and developing connections and collaboration between leaders and organizations who are committed to collectively tackling such complex crises.

Recently, alongside his current role as Managing Partner of PTI Advisors, he has strongly supported an innovative organization providing resource for people impacted by man-made as well as natural disasters: NeedsList. Founded by two passionate women entrepreneurs, Natasha Freidus and Amanda Levinson, NeedsList is utilizing technology and transparency to dramatically improve the ease and speed of donors to support specific, urgent needs of refugees and other vulnerable people in need.

They write of him: “Paul has been instrumental in helping us develop our partnership strategy at NeedsList. His commitment to and deep understanding of the urgency to support people displaced by conflict and upheaval is tremendous. We’re grateful to have him on board!”

Paul says, “It is our solidarity, our collective commitment to support our fellow men, women and children in need, that will bring both short and long-term resolution to this crisis.  Compassion and commitment to address and safeguard the most fundamental humanitarian needs is truly a multi-sectoral priority.  Building bridges for NeedsList, Crossroads and respective partners and supporters continues to grow the positive impact. Connected by purpose, we more effectively serve those in urgent need.”

Anyone can immediately and directly play a role by supporting any one of the urgent needs list on the NeedsList site. 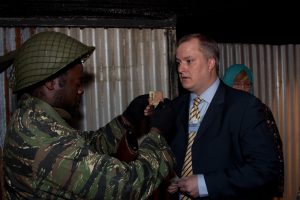